Alex and Barbara McLachlan commenced the Airlie Charolais herd in 1978. To ensure the herd reached the highest available standard, genetic material was introduced from New Zealand, Europe and North America. Foundation females were purchased throughout Australia and New Zealand. Through the use of Embryo Transplantation (ET) and Artificial Insemination (AI) the herd has advanced to the stage where over 300 females are calved annually.

Significant sires in the development of the herd have included Brookfield Reagan, imported from New Zealand, an outstanding sire who swept all before him in the show ring including the Hordern Trophy at Sydney Royal. Reagan's breeding ability led the principals to import his dam to commence a Full French breeding line. 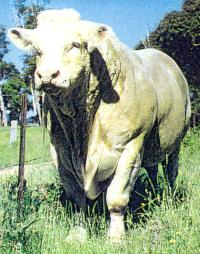 Fleets Rascal, an AI sire imported from England, has had an enormous impact on the Australian herd and has left a line of outstanding breeders.

AI is utilised wherever possible and the best young Airlie sires are used within the stud.

With over three hundred calves a year the ability to cull heavily guarantees the standard offered for sale is high.

We stand behind our cattle as breeders and are confident that an Airlie animal will perform for you. It is pleasing to us to see females and sires from our herd working so well for other herds both Stud and Commercial around Australia and New Zealand.

We have the ability to offer Full French, Polled, Red Factor and Bulls of all grades.

As a further aid for your selection the entire Airlie herd has now been enrolled on Group Breedplan.

We welcome your enquiry about the Airlie programme and offer herd inspections at any time by appointment.